By using this website, I acknowledge that I am 16 years of age or older, and I agree to the Terms and Conditions and Privacy Policy.
Under 16? Accept
Back
Videos
Podcasts
Reading Plan Downloads Classroom Beta Give
More
Watch Videos BibleProject Podcast Reflections Bible Study Blog Give
Explore Resources
More
0
Login  /  Join
Bible Reader
Languages

Combining Tim’s deep biblical understanding and Jon’s passion for visual storytelling, the guys created their first two videos in 2014 and put them online for free. Their idea has now grown into a collaborative, full-time labor of love made up of artists, illustrators, designers, and supporters.

Tim
Co-Founder | Chief Education Officer
Tim Mackie is a writer and creative director for BibleProject. He has a PhD in Semitic Languages and Biblical Studies. He wrote his dissertation on the manuscript history of the book of Ezekiel, with a focus on the Septuagint and Dead Sea Scrolls. What a total nerd! He is a professor at Western Seminary and served as a teaching pastor for many years.
Jon
Co-Founder | Chief Product Officer
Jon Collins is a writer and creative director for BibleProject. He has a BA in Biblical Studies from Multnomah University (where he met Tim). Jon is affectionately known by the team as the Architect of Ideas. He is a master of making complex ideas simple, and has spent the last decade founding and leading digital media and marketing companies.
Gerry
Board of Directors
Gerry Breshears is on BibleProject’s Board of Directors. He has a PhD in Systematic Theology and has served as a professor for over 30 years at Western Seminary in Portland, OR. Aside from providing counsel to Tim and Jon as a Board member, he also consults on our scripts and content portfolio.
Steve
Chief Executive Officer
Steve Atkinson serves as BibleProject’s Chief Executive Officer. He oversees all operations both internal and external for BibleProject. He spent 15 years in the marketplace in sales and marketing, most recently as President of the Masters Plan Foundation.
Rudy
Chief Operating Officer
As BibleProject's Chief Operating Officer, Rudy helps strategy and growth. He got his PhD in Neuroscience, but he now wishes it had been in Semitic Languages! Prior to joining our team, he served some of the world's largest organizations to develop and execute strategy and innovation. He married up and has four mischievous kids and one cat.
Josh
Chief People Officer
Joshua Eddleman is our Director of People. He geeks out on seeing teams work efficiently and individuals thrive in their craft. He has worked with creative teams both in the for-profit and not-for-profit worlds for over 15 years. Prior to BibleProject he was overseeing operations and production at a brand strategy agency.
Miriam
Executive Producer
Miriam Chesbro oversees the animation studio as our Executive Producer. Since the early days she has kept our video timelines humming along while always managing a handful of other projects with the help of giant wall-size gantt charts and a good dose of scrappy resourcefulness.
Joel
Chief Financial Officer
Joel Paul is the Chief Financial Officer at BibleProject. Joel spent some time in public accounting before serving six years as the director of finance at a large community church in Portland, OR. Joel loves the entrepreneurial aspect of team building and creating efficiencies of new and existing processes that best serve the organization.
Sydney
Chief Marketing Officer
Sydney Bolinger serves as our Chief Marketing Officer. From our YouTube channel to our email inbox, Sydney and her team are passionate about always improving the way we serve our ever-growing audience through BibleProject's digital and print channels. When she’s not pumping up the team or finding new ways to delight our audience, you can find her hiking among the beaches, forests, and volcanoes of the Pacific Northwest with her husband Cody.
Mike
Chief Global Focus & Strategic Relationships Officer
Michael McDonald works on cultivating awareness and creating strategic relationships with churches, organizations and other non-profits that are looking to use BibleProject Videos in their context. He also leads our Global Focus team which is working on localizing our videos into different languages. He previously spent 11 years leading a global development organization as well as serving on several boards for international organizations with compassion and justice missions. In a previous life, he owned and operated restaurants in Canada and the US, and still loves enjoying a great meal in new cities with his wife, Melissa.
Robot
Senior Art Director
Robert Perez is an illustrator who teamed up with the project during its initial conception and has stuck around ever since. Now the Senior Art Director, his job and passion is to bring an excellence not only to the artwork, but also the storytelling of anything we make. Fun fact: He’s lovingly known as Robot or Bot around the studio.
Jon D
Chief Technology Officer
Jon Dobson is the Chief Technology Officer at BibleProject. He brings 25 years of experience in the animation and visual-effects industry where he worked on Disney theme park attractions, several feature films, and everything in between. Prior to joining BibleProject, Jon was a Senior Technical Director at Laika animation.
Aeron
Director of Product
Aeron Sullivan is our Director of Product and comes to us from the military and for-profit technology sector. He holds a bachelors in political science and an MBA. In 2016, Aeron was named one of Inc. Magazine’s 30 Entrepreneurs Under 30. He resides in San Diego, CA with his wife and two daughters.

We love our team!

We have a talented team of animators and illustrators, designers, data scientists, support staff, writers, and finance experts who make this project possible!

We value creativity, technology, and people.

Would you like to work with us? Visit our careers page page to see if we have any open positions, or to see what we look for in a potential member of the team. 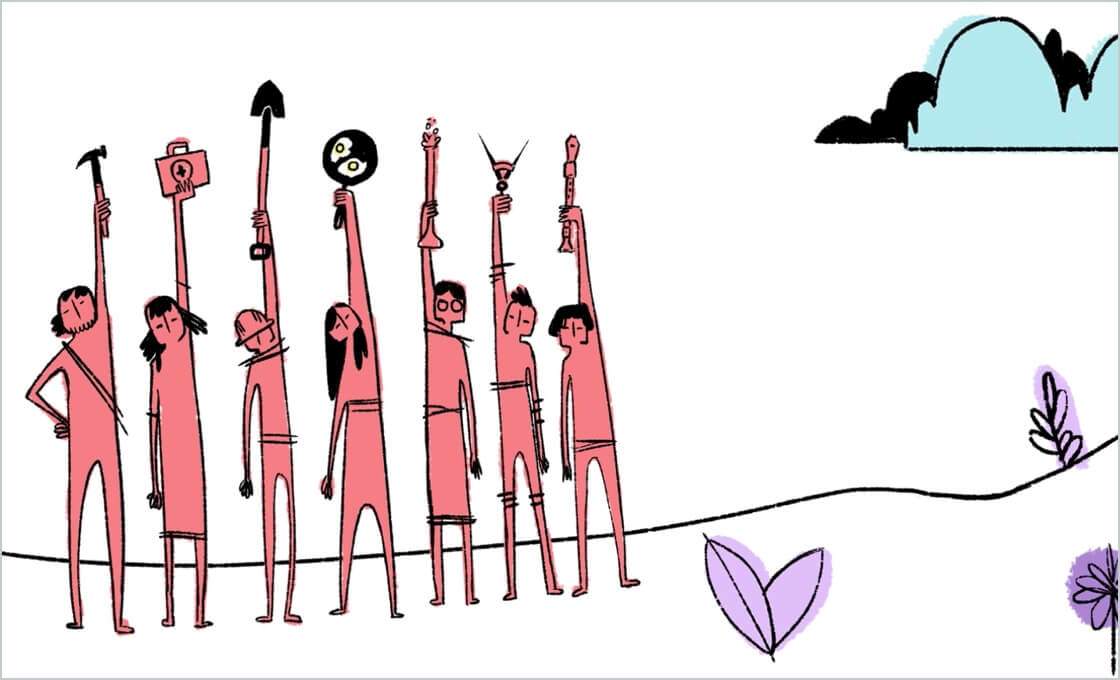 How can I help you?
Hi I’m Support Bot! You can ask me questions like:
How can I donate?
How do I update my payment method?
How do I cancel my recurring donation?
Why did I stop receiving your emails?
How do I find a specific resource in your library?
More Questions
Support Bot Said,
For advanced bible reading tools:
Login  or  Join