In this week’s Church at Home Bible study, we’re going to look at the biblical portrait of sin being an individual and corporate problem.

For this week’s Church at Home, we invite you to reflect on the sadness and anger that has erupted in our culture over the realities of racial injustice in our world. We also invite you to ponder the raw and honest portrait of human sin in the Bible.

The biblical authors want us to take an honest look at our personal and communal failures, but not so we can blame others or hate ourselves. Rather, an honest evaluation of our human condition points us to the only source of ultimate hope: the generous love of God that has the power to recreate us as new humans who can truly love God and neighbor. 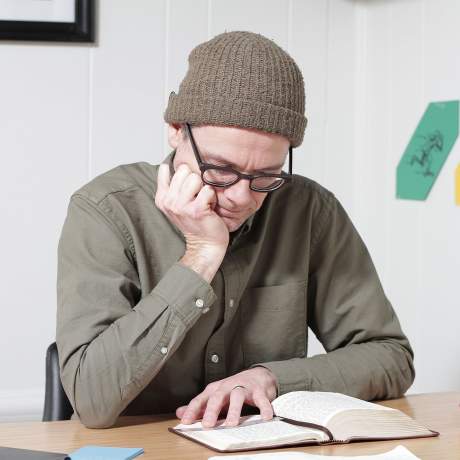 Listen to a short message from Tim on Sin. You can listen to this on your own or with a group. If you are leading a small group or family, feel free to listen to the message and contextualize it for your needs.
0:00 / 0:00
Download

After watching the video, what stood out to you about what the word “sin” means in the Bible?

This is the first time the word “sin” appears in the Bible. Notice that sin is depicted as a powerful, animal-like entity that is luring Cain to let his jealous anger turn into violence against his brother. It’s not just that Cain committed a sin, though that’s true. It’s that he gives himself over to the power of another story about human dignity––one that does not value the life of his brother. In Cain’s story, sin is a power that leads to a distorted view of ourselves and others. This distortion spreads to his family and community, illustrated in the story of his violent descendant Lamech. This is a profound portrait of sin that has immense potential to help us understand the power of sin in our own lives, families, and communities.

In this poem we hear King David’s confession after committing the heinous crimes of adultery and murder against his own people. He uses powerful imagery to describe how distorted his character has become––stained, broken, guilty––but he also paints a contrasting portrait of God’s generous mercy towards his failed human creatures. God is willing to clean and wash, to repair and recreate, to offer forgiveness. Notice that David doesn’t look for hope in his own power and ability to reform himself. Rather, he looks to God’s compassion and power to create a new humanity, one that lives by God’s will and love.

Here John invites people who live in the darkness of moral compromise to step into the divine light of God’s truth and love. He encourages honesty so that we will stop trying to hide our failures (remember, that’s what “sin” means) and instead bring them into the open. That’s what it means to walk in the light! And we are open about our sin not because we think we can do better but because we trust that God’s love has already moved toward us in the life, death, and resurrection of Jesus. It’s by focusing on the eternal love of God that we find the motivation for true confession and hope.

Interested in learning more about Sin in the Bible?

How can I help you?
Hi I’m Support Bot! You can ask me questions like:
Where should I start?
How can I track my video progress?
Do you offer subtitles for your videos?
Support Bot Said,
For advanced bible reading tools:
Login  or  Join