Mount Sinael is the famous spot where Yahweh gives Moses the Ten Commandments, and it is the location where most of Exodus, all of Leviticus, and the first 10 chapters of Numbers take place. When Israel first arrives at Sinai, they fail yet another test and try to get Moses to pass it for them. In this episode, join Tim and Jon as they explore Yahweh’s fiery presence, the test at Sinai, and the question of Israel's national identity: Will they be the kingdom of priests Yahweh intends?

The moment God showed up, it was freaky. Passing the test was going to require a great surrender and walking into what looked like death, walking into the flames. But the people don’t want to do it. So what the people say to their representative is, “You go into the fire of God on our behalf.” It’s sort of like, “Moses, you pass the test on our behalf.” The people stay away, and so instead of becoming a kingdom of priests, they become a kingdom with priests, and a kingdom really just having one mediator on behalf of the whole.

A Year at Sinai

In part one (00:00-11:30), Tim and Jon dive into Israel’s arrival at Mount Sinai—the narrative location for the rest of Exodus, all of Leviticus, and the first ten chapters of Numbers (all of which transpires in one calendar year).

They’ve been traveling through the wilderness since the night of Passover, and three months in, they arrive at the foot of Mount Sinai, which is the very mountain where Moses met Yahweh within the burning bush years before. The exciting, jam-packed action story that began with the exodus grinds to a halt as Moses receives Israel’s covenant laws from Yahweh.

Israel’s arrival at Mount Sinai is part of the second movement of Exodus, where we’re tracing the theme of the test. While it might not look like one at first, the narrator calls this moment a test too.

The Literary Structure of Exodus 19-24

In part two (11:30-21:30), Tim and Jon provide an overview of Exodus 19-24. Yahweh gives Israel the famous ten commandments, followed by 42 more laws. These are far from exhaustive—in total, Yahweh gives Israel 613 laws—but they represent the terms of Israel’s covenant with Yahweh.

Exodus 19-24 is packed with narrative flashbacks and foreshadowing that can be hard to understand. Making sense of the meaning of this section hinges on its literary structure. It’s helpful to know the basic order of events.

Throughout this section, Moses goes up and down the mountain seven times. The narrative is out of linear sequence, inviting us as readers to read and reread it and meditate on its deeper meaning.

Called up on the Mountain

In part three (21:30-43:00), Tim and Jon take a closer look at Exodus 19. At the opening of this section, Moses ascends Mount Sinai, and Yahweh gives him a message for Israel.

Exodus 19:4-6 You yourselves have seen what I did to the Egyptians, and how I bore you on eagles’ wings, and brought you to myself. Now then, if you will indeed obey my voice and keep my covenant, then you shall be my own possession among all the peoples, for all the earth is mine; and you shall be to me a kingdom of priests and a holy nation.

Yahweh reminds Israel of where they’ve been and how he delivered them from Egypt. Then he envisions their future as his people, meant to be an entire kingdom of priests. This future hinges upon Israel’s ability to do what Yahweh has asked of them in each of the previous wilderness tests (which we explored at length in our last episode): listen to his word and trust him.

The tests aren’t ultimately about whether Israel will simply trust Yahweh for bread and water, but whether they will trust his word, period. Trusting Yahweh’s word is foundational to bearing his image and being his representatives—the purpose Yahweh intended for all of humanity! When humanity failed, Yahweh chose Abraham’s family. Now, in the wake of the family’s failure, Moses represents Yahweh to the nation.

Yahweh instructs Moses to consecrate the people and get them ready to make a covenant in three days.

Exodus 19:13 When the ram’s horn sounds a long blast [on the third day], they shall come up to [or ascend onto] the mountain.

Here’s where things get tricky. Some translations of this section indicate Yahweh invites the people to the foot of the mountain and no further, while others (including Tim’s translation) indicate he wanted them to come up and join him on the mountain. Likely, the former of those translations is harmonizing a Hebrew preposition with what ends up happening—Israel fails to ascend the mountain.

This is another failed test narrative, and the key to this passage is the flashback in Exodus 20:18-21. Yahweh comes to the mountain in cloud and fire, and the ram’s horn sounds and keeps on sounding. But the people don’t ascend the mountain because they’re afraid. Eventually, Yahweh calls Moses up and says the people missed their chance (Exod. 19:18-25).

Meant To Be a Kingdom of Priests

If Yahweh never wanted Israel to come up the mountain, then they passed the test. However, if Yahweh did want them to come up on the mountain, then Israel failed the test. The test in this case is part of the design pattern that started all the way back with Adam and Eve: are people willing to surrender their version of life and trust God’s command, even if it looks like something terrifying that could result in death? In fact, Israel’s experience with Yahweh at Mount Sinai is packed with literary hyperlinks from Genesis 3 and Genesis 22. The author of Exodus is comparing Israel’s failure to ascend the mountain (Exod. 19:16-25 and 20:18-21) with humanity’s failure in the garden test (Gen. 3), as well as contrasting both of these failures to Abraham’s success in passing the test on Mount Moriah (Gen. 22). 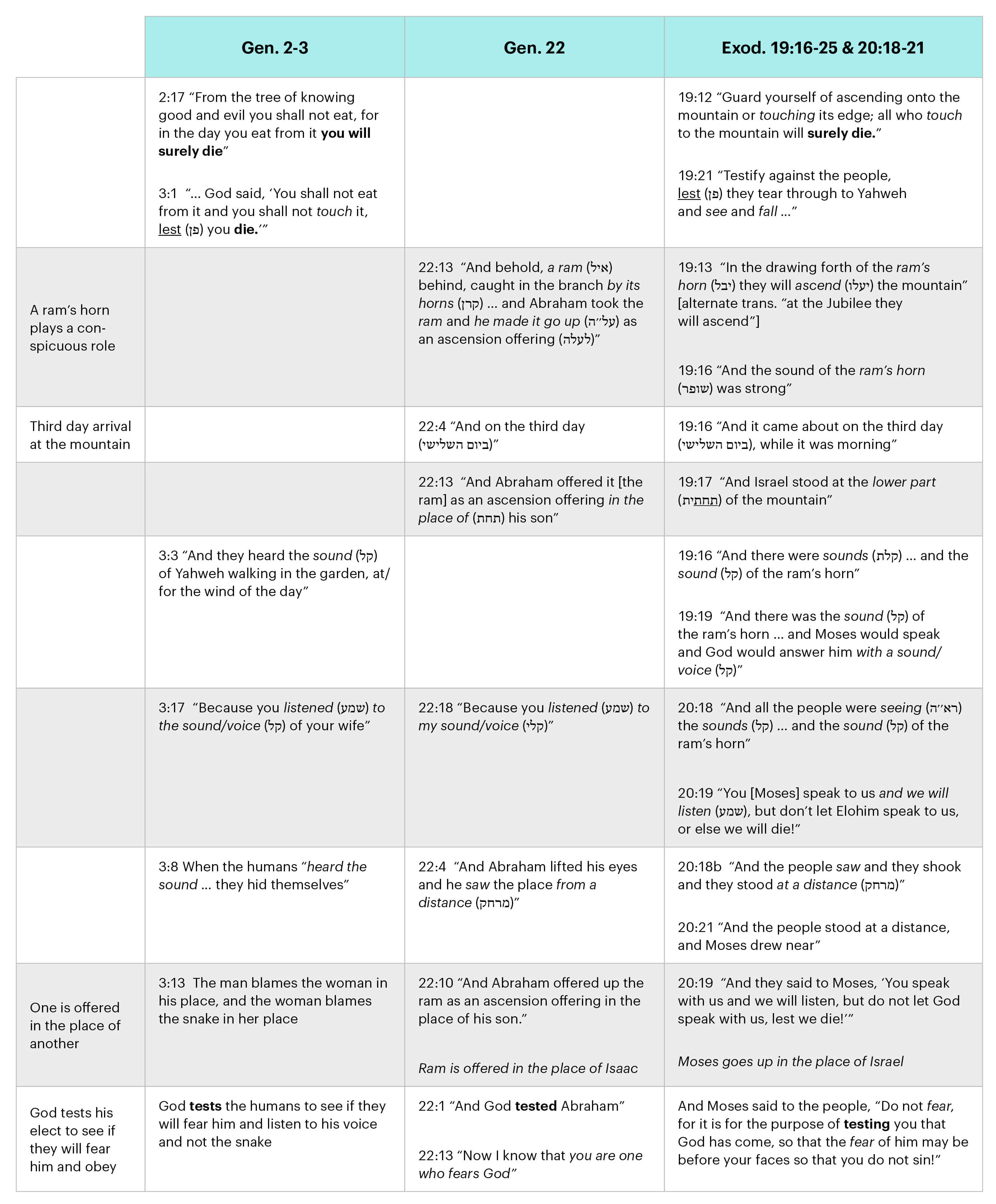 When Yahweh showed up on Mount Sinai, it was freaky. All the Israelites could see of God was the mountain on fire. To come up into his presence would have required a great surrender, a willingness to walk straight into the flames. The people are scared, so they send Moses in their place. It’s sort of like they’re saying, “Moses, you pass the test on our behalf.”

Because the people fail the test here, instead of becoming a kingdom of priests, they become a kingdom with priests. In this narrative in particular, they have just one mediator, Moses, who is highlighted as a righteous intercessor. Yahweh still meets his people halfway, willing to accept one righteous mediator even if the whole congregation stands at a distance.

Exodus E9  –  1hr 1m
Why Does the Tabernacle Furniture Even Matter?
1hr 1m

Exodus Q+R  –  1hr 13m
Did God Try To Kill Moses?
1hr 13m
Previous Episode
Israel Tests Yahweh
Back to Podcast
Next Episode
What Are the Ten Commandments All About?
For advanced bible reading tools:
Login  or  Join
Which language would you like?