Jesus often used parables as a means of indirect communication to critique and dismantle his listener’s views of the world in order to show them the true nature of God’s Kingdom. In this episode, Tim and Jon talk about the role of the parables in persuading listeners through subversive critique.
0:00 / 0:00
Download

The parables sneak in through the back window. They’re little stories that, if you ponder them, actually embody a totally different way of seeing the world. But you maybe don’t know that at first.

The Indirect Nature of Parables

In part one (5:25–25:00), Tim and Jon open the conversation by reviewing the first two episodes. Jesus told parables as a form of indirect communication to communicate how he was bringing the Kingdom of God to ancient Israel. These parables didn’t make sense to those who were unwilling to listen, but for those who had “ears to hear,” the parables revealed the Kingdom of God. These parables were a subtle commentary on what Jesus himself was doing in the moment. They helped the listeners make sense of what Jesus was doing.

And what was Jesus doing? Jesus was bringing about the culmination of the story of God in the Hebrew Scriptures. Many of his parables draw from imagery and themes from the Hebrew prophets. These parables were repeated often, with subtle variation for each audience.

In this conversation, Tim and Jon take a deeper look at the cryptic nature of the parables—that Jesus often communicated indirectly about the things which were most important to him. Tim quotes from Klyne Snodgrass.

“Direct communication is important for conveying information, but learning is more than information intake, especially if the learner is someone who already thinks they understand. People entrenched in their current understanding set their defenses against direct communication, and end up conforming the message into the channels of their current understanding of reality. But indirect communication finds a way in through the back window to confront a person's view of reality… A parable’s ultimate aim is to draw in the listener to awaken insight, to stimulate the conscience, and move to action. Jesus’ parables...are prophetic instruments...used to get God’s people to stop, reconsider their way of viewing reality, and to change their behavior.”
– Klyne Snodgrass, Stories with Intent, 8-9.

The parables are small stories that, when pondered, change the way you see the world.

2 Samuel 12:1-7
Then the Lord sent Nathan to David. And he came to him and said, “There were two men in one city, the one rich and the other poor. The rich man had a great many flocks and herds. But the poor man had nothing except one little ewe lamb which he bought and nourished; and it grew up together with him and his children. It would eat of his bread and drink of his cup and lie in his bosom, and was like a daughter to him. Now a traveler came to the rich man, and he was unwilling to take from his own flock or his own herd, to prepare for the wayfarer who had come to him; rather he took the poor man’s ewe lamb and prepared it for the man who had come to him.”

Then David’s anger burned greatly against the man, and he said to Nathan, “As the Lord lives, surely the man who has done this deserves to die. He must make restitution for the lamb fourfold, because he did this thing and had no compassion.”

Nathan then said to David, “You are the man!

Tim then shares a parable from Jesus in the Gospel according to Luke.

Luke 14:1, 7, 15-24
And it happened that Jesus [on his way to Jerusalem] was invited into the house of one of the leaders of the Pharisees on the Sabbath, to eat bread, and they were watching him closely…He noticed how they had been picking out the places of honor at the table…

When one of those who were reclining at the table with him heard this, he said to Him, “Blessed is everyone who will eat bread in the Kingdom of God!”

But he said to him, “A man was giving a big dinner, and he invited many; and at the dinner hour he sent his slave to say to those who had been invited, ‘Come; for everything is ready now.’ But they all alike began to make excuses. The first one said to him, ‘I have bought a piece of land and I need to go out and look at it; please consider me excused.’ Another one said, ‘I have bought five yoke of oxen, and I am going to try them out; please consider me excused.’ Another one said, ‘I have married a wife, and for that reason I cannot come.’

“And the slave came back and reported this to his master. Then the head of the household became angry and said to his slave, ‘Go out at once into the streets and lanes of the city and bring in here the poor and crippled and blind and lame.’ And the slave said, ‘Master, what you commanded has been done, and still there is room.’ And the master said to the slave, ‘Go out into the highways and along the hedges, and compel them to come in, so that my house may be filled. For I tell you, none of those men who were invited shall taste of my dinner.’ ”

Tim and Jon unpack this parable. In the ancient world, for a public feast to be declined by all guests would be a mark of shame. Jesus notes this while sitting at a banquet. Then the king in the parable invites the lowest people in the culture, and then everyone indiscriminately. What matters is whether the guests show up.

Jesus challenges his listeners’ assumption about what the Kingdom of God will be like, but he doesn’t do it directly.

“For Jesus, the parables were not used to explain things to people’s satisfaction, but to call into question all of their previous explanations and understandings… Far from being illustrations that illuminate what people haven’t yet figured out, the parables are designed to pop every circuit breaker in the mind… Mention “messiah,” and the disciples pictured an armed king on horseback; mention “forgiveness” and they start setting up rules about when it should run out. From Jesus’ point of view, the sooner their misguided minds had the props knocked from under them, the better. After all their yammer about how God should or shouldn’t run his own operation, getting them to just stand there with their eyes popped open and their mouths shut would be a giant step forward.”
– Adapted from Robert Farrar Capon, Kingdom, Grace, Judgment in the Parables of Jesus, 5-7.

In order to show us what the Kingdom of God is really like, some parables need to dismantle our previously held beliefs first. This subtle way of reshaping our thinking is what much of the Hebrew Scriptures does as Jewish meditation literature.

The First Kind of Parable

In part three (43:00–end), Jon unpacks the parable of the dinner further. The preexisting views about status prevent them from going to the party. The real party is what Jesus is doing through his ministry and the people he’s inviting to be part of a new family.

This inversion of value systems as told through the parables is a key feature of Jesus’ parables. It’s similar in some regards to sarcasm, which is a simple modern form of indirect communication.

Tim then shares the first of three basic buckets from the parables.

Jon shares a question from the Gospel of Thomas. This book uses many said sayings of Jesus to communicate a worldview altogether different than the Hebrew Scriptures. However, some of the parables can still show us the surprising nature of God’s Kingdom. Jon shares from Gospel of Thomas 97, "The kingdom of the father is like a certain woman who was carrying a jar full of meal. While she was walking on the road, still some distance from home, the handle of the jar broke and the meal emptied out behind her on the road. She did not realize it; she had noticed no accident. When she reached her house, she set the jar down and found it empty."

While not debating the veracity of this parable, Tim and Jon ponder it to consider how many of Jesus’ listeners would have pondered parables about the Kingdom they were hearing for the first time. 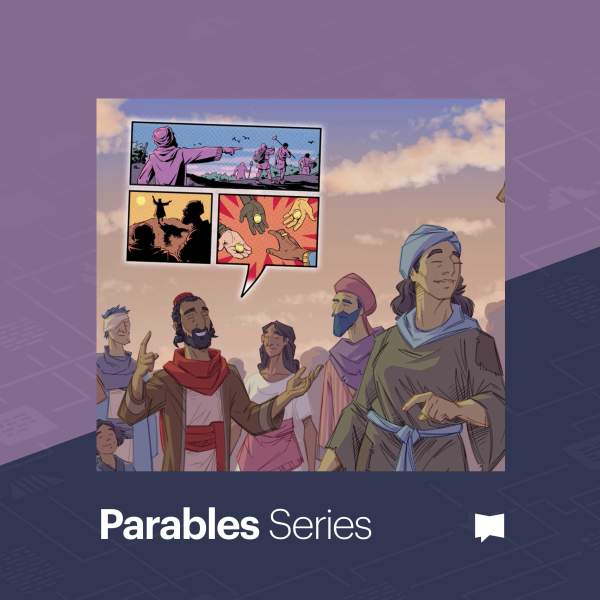