Is the Tree of Life Practical?

We are concluding our Tree of Life series with a question and response episode. In this episode, Tim and Jon respond to audience questions on the theme of the Tree of Life in the Bible. Thank you to everyone that submitted questions!
0:00 / 0:00
Download

Questions about the Tree of Life Podcast Series

Luke from Houston - (1:56) If the tree of the knowledge of good and evil places the option before humans of either receiving wisdom from God––on his terms in his way––or reinventing good and evil for themselves in a way that may be beneficial for them but dangerous for others, what does it mean practically to make that decision for yourself? How do biblical characters navigate the question, and how can we do that today?

Mitchell from Kansas - (10:55) I had a question regarding Genesis 3. After Adam and Eve take of the tree of the knowledge of good and evil, and they realize that they're naked, and they feel shame they cover themselves with leaves. And I might be grasping at straws, but what would it mean in the concept of trees for them to be covering themselves with things of trees, covering their shame with that?

Merryl from Maryland - (30:36) God created the earth and the dome over, and the earth separated everything and created order from chaos. Does that mean his original creation was chaos and that outside the garden was chaos and inside was order? Or does that mean that the whole place was ordered and when the first humans got exiled and brought the curse out into creation that they changed the order back into chaos? I'm trying to figure out if it was chaotic when they got there or if they brought chaos with them?

Elena from Bulgaria - (43:48) In Genesis 21:33 after resolving an issue about a well with Abimelec, Abraham plants a tamarisk tree in Bethsheba, supposedly by the well. Is there any significance to the fact that he doesn't build an altar or a biller but plants a tree and specifically this type of tree, a tamarisk tree?

Darran from Washington - (46:55) My question has to do with the "humans are trees" idea. Ever since watching Tim's Year of Torah videos, Deuteronomy 20:19 has really intrigued me. Do you think the biblical authors are making a pun that is riffing off of the humans are trees theme from Genesis 1?

Peter from the Netherlands - (50:55) I was wondering if there's a connection between trees and high places and highly placed people. Because in the examples that you gave about people being like trees, it seems that there are always highly placed people involved. And also when someone is making a decision at the high place at the tree at the high place, it seems that these decisions do not just affect their own lives, but also the lives of many others.

Garrett from Tennessee - (53:09) My question is from the book of Esther. In the book of Esther there are gallows set up for Mordecai by this evil character Haman, and that word gallows is, from what I can tell, the only place translated "gallows." But I think it's interesting that this evil character thinks that he's going to do away with this righteous person and instead meets his death on this tree that is translated instead to gallows. So just want to get your thoughts on that.

Lauren from Dallas - (56:19) One tree that pops up in John 1:48 is when Jesus sees Nathanael under the fig tree. That has always perplexed me, and I have been wondering if there is significance there and if you could elaborate on that?

The Tree of Life: Lost but Not Forgotten

Andy Dvoracek and the BibleProject team When you think about the tree of life, what are some of the things that come to mind? It may come as a surprise to many that the tree of life reappears elsewhere in the Bible. Read our blog to discover the Tree of Life meaning as a Biblical theme.... Keep Reading
Podcast Series
Related Podcast Series 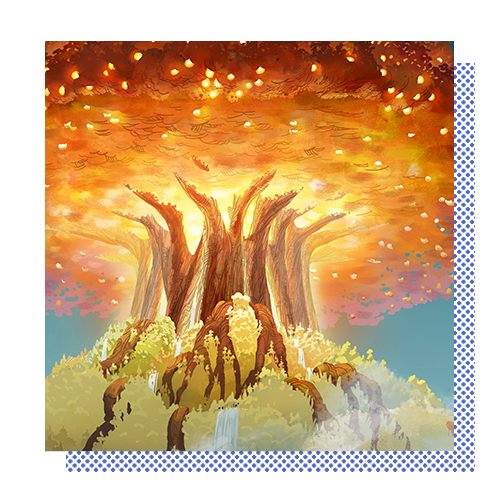 Tree of Life Podcast
10 Episodes
Tree of Life Podcast Episode 1
Humans are... Trees?
Humans are like trees. This idea might seem strange to us until we see how the Hebrew Bible connects them with the same key words, images, and scenes. Humans and trees are found together at most of the hinge points in the biblical story. Listen in as Tim and Jon discuss these parallels in the Bible.
Tree of Life Podcast Episode 2
Trees of the Ancients
The tree of life represents God’s own life given as a gift to humanity. This image echoes across ancient Near Eastern cultures, and even today, people long for the peace and security symbolized in the tree of life. Listen in as Tim and Jon explore the meaning and context of the tree of life.
Tree of Life Podcast Episode 3
The Tale of Two Trees
On the first pages of the Bible, God places humans in a lush garden to rule with him. There are two trees in the garden, and humanity is presented with a choice: trust God and enjoy his good gifts or take the knowledge of good and bad for themselves. The tale of two trees tells us something profound about the human condition and the choice we all face.
View Entire Series
0:00 / 0:00
Download
Previous Jesus on the Cursed Tree Tree of Life Podcast Next The Restless Craving for Rest 7th Day Rest - Sabbath
How can I help you?
Hi I’m Support Bot! You can ask me questions like:
Where should I start?
How can I track my video progress?
Do you offer subtitles for your videos?
Support Bot Said,
For advanced bible reading tools:
Login  or  Join