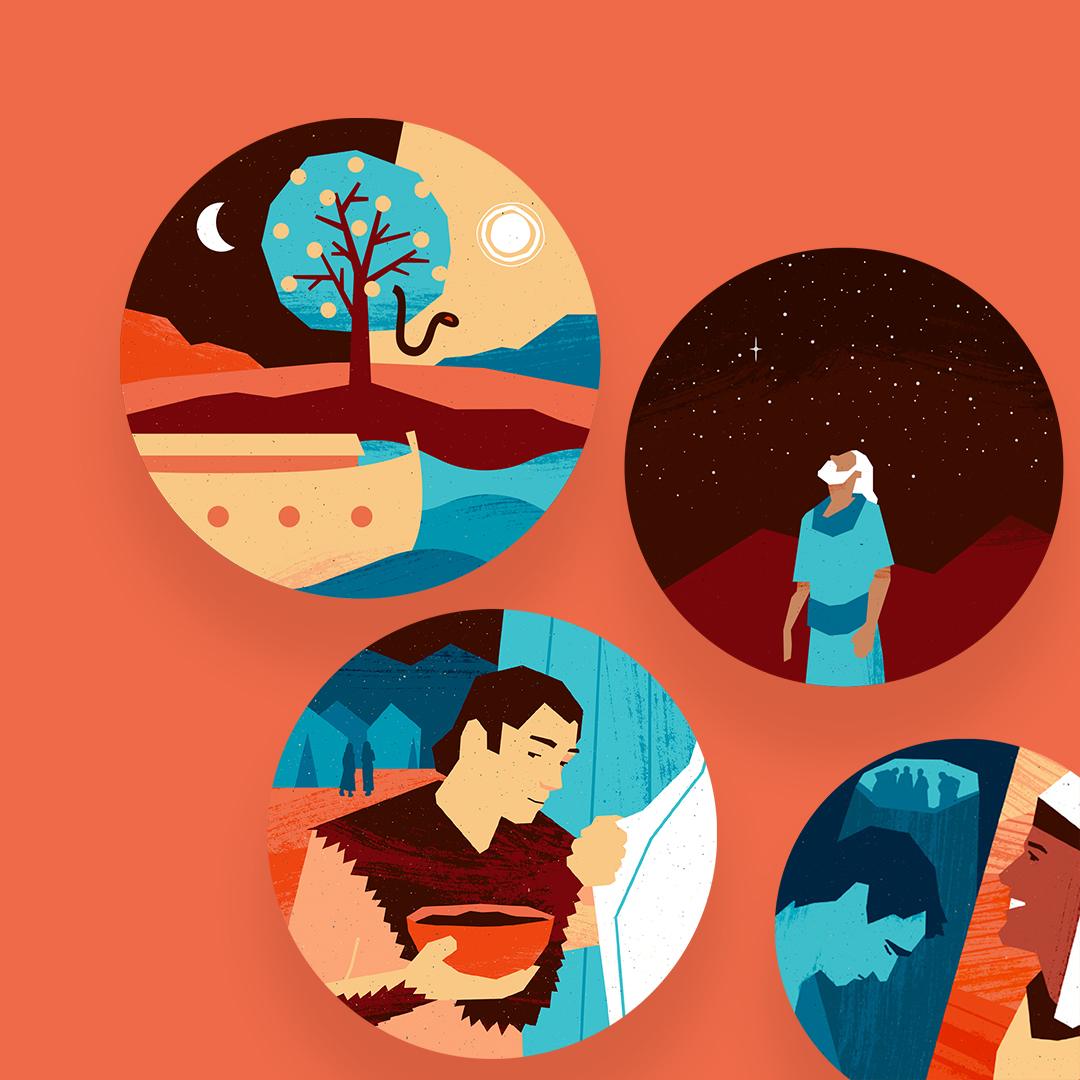 Genesis Scroll • Episode 1
God’s Spirit in Creation
57m • January 3, 2022
Why does the author of Genesis make a point to name God’s Spirit in Genesis 1 and 2? In this week’s episode, Tim, Jon, and Carissa embark on a new journey for the BibleProject podcast—reading the Bible in thematic movements, starting with a close look at the Holy Spirit’s role in the book of Genesis.

It’s a metaphor—the basic image of ruakh is breath or wind, so invisible, animating energy. There’s an invisible energy that I breathe in and breathe out, and that’s ruakh. And then I look out in the world, and I see the ruakh blowing in the trees and the grass. That’s animating energy too, and it’s the very thing I take in when I inhale. So calling God’s invisible Spirit ruakh is a metaphor, taking my visible, human experience of ruakh in and out and seeing ruakh at work in the world, and coming to the conclusion that the beautiful mind behind all this … all this must be a result of that being’s ruakh.

Reading the Bible in Movements

In part one (00:00-10:00), Tim, Jon, and Carissa introduce something new for the BibleProject podcast: walking through the Bible not chapter by chapter but movement by movement, tracing a singular theme in each movement. The first movement of the first scroll of Scripture is Genesis 1-11, in which we will trace the theme of God’s Spirit.

The Bible is a collection of scrolls, which are grouped into larger bodies of scrolls (e.g., the Torah or the Prophets). Each of those scrolls is divided thematically into movements. In fact, the original scrolls didn’t have chapters—English translators added those later. Rather, the biblical authors created a design (what we’re calling movements) signaled by repetition and symmetry.

By training our minds to read the Bible in movements, we can see the structure of larger sections of Scripture united by themes, which greatly influences the way we understand the meaning of entire sections of text.

The Breath of God

In part two (10:00-23:00), Tim, Jon, and Carissa dive into the theme of the Holy Spirit in movement one of Genesis. God’s Spirit appears in eight passages in this movement.

The first time God’s Spirit appears in the Bible is in Genesis 1:1-2. The Hebrew word for spirit is ruakh, which means breath—the invisible life-energy of a person. It can also mean wind—an invisible power (breath) that animates humans and all creation.

Why does the author of Genesis specifically identify not just God but the Spirit of God in this passage? It’s a metaphor. We can observe in the world around us the wind blowing in the trees and the grass, and it “animates” the movement of those plants. It’s also the very element we inhale that allows us to live. This physical experience and image becomes a picture of the beautiful mind behind all of creation—he energizes and sustains all life. That’s what the author of Genesis is showing us in Genesis 1:2.

God’s Spirit in All Living Beings

When this narrative opens, the land is dry and barren, devoid of human, animal, and plant life (and incapable of sustaining such creatures anyway). In Genesis 2:7, God forms Adam from the ground, but he’s lifeless until God breathes the breath of life into his nostrils. The Hebrew word for “breath of life” here is not ruakh but nishmat hayyim. Both humans and animals receive this life-giving breath. Our role and responsibility to represent God (see Genesis 1:26-27) sets humans apart from animals.

The Wind of the Day

In part four (39:00-50:00), Tim, Jon, and Carissa discuss the next appearance of God’s Spirit, which occurs in Genesis 3 after Adam and Eve eat from the tree of knowing good and evil.

This picture of Yahweh walking about/strolling in the garden, waiting for the humans to join him, is a powerful image of divine and human intimacy idealized in the garden. Throughout the rest of the Hebrew Bible, righteous people are called “those who walk/stroll with Yahweh,” which means they relate to God in the Eden ideal.

The phrase in Genesis 3:8, “the cool of the day,” shows that the translator has interpreted the Hebrew expression to mean a certain time of day. But the word translated here as cool is ruakh, so the literal phrase is “the wind of the day.” The author of Genesis is conjuring an image: God is walking in the garden, and the humans hear him coming and hide. This is the first of many moments throughout the Hebrew Bible where God shows up (especially after humans have failed a test), and the sound of his arrival is loud, intimidating, and indistinguishable from thunder. The voice of Yahweh is sometimes depicted as a character in its own right.

In part five (50:00-end), Tim, Jon, and Carissa summarize the first three appearances and actions of God’s Spirit in the opening movement of Genesis.

In the first movement of the Genesis scroll, we witness the role of God’s Spirit to both give and take away life.

Genesis Q+R  –  1hr 2m
Why Can’t Jacob and Esau Both Be Blessed?
1hr 2m
Previous Episode
Back to Podcast
Next Episode
God’s Spirit in the Flood Narrative
How can I help you?
Hi I’m Support Bot! You can ask me questions like:
How can I donate?
How do I update my payment method?
How do I cancel my recurring donation?
Why did I stop receiving your emails?
How do I find a specific resource in your library?
More Questions
Support Bot Said,
By using this website, I acknowledge that I am 16 years of age or older, and I agree to the Terms and Conditions and Privacy Policy.
Under 16?
Accept
For advanced bible reading tools:
Login  or  Join
Which language would you like?