Historical
Narrative,
Epic Narrative
Many Israelites return to Jerusalem after the exile, and face some success alongside many spiritual and moral failures.

Originally written together as a single book in the Jewish Scriptures, Ezra and Nehemiah document the fulfillment of God's promise that Israel will return home after 70 years of exile in Babylon and restore their ruined dwellings again.

Zerubbabel and Nehemiah both play a part in restoring God's Temple, while Zerubbabel takes charge over governing affairs, and Nehemiah rebuilds the Walls of Jerusalem. Ezra, a descendant of Aaron, arrives in Jerusalem later and instills God's laws to the post-Exile Jewish generation.

Note how the people received revelation and responded after they listened to the Word of God that was being taught to them. This response is remarkably similar to Jesus' teachings about God's Kingdom centuries later, and His often-repeated phrase, "He who has an ear, let him hear..." The takeaway? Whether it's ancient Israel or our worship today, we all must receive a new heart from God and listen to Him.

Return from Exile
Fulfilling Jeremiah's prophecy, Persian King Cyrus allows the exiled Jews to return home. Zerubbabel, Nehemiah, and later Ezra travel to Jerusalem. Rebuilding Israel begins.
Temple Restored
Despite local opposition, Zerubbabel and the Jews successfully rebuild the Altar and God's Temple. They officially celebrate the Passover the first time in 70 years.
Spiritual Renewal
Truth is revealed to the new Jewish generation as Ezra and Nehemiah teach them the Torah. Ezra and Nehemiah reform their community to practice holiness.
Rebuilding of the Wall
Persian King Artaxerxes allowed Nehemiah to return Jerusalem and rebuild the walls. Nehemiah trusts in God, the construction is completed, dedicated, and the Jews corporately praise God.
Repentance
After hearing the Torah, the Jewish people realize the sins they committed and immediately address them. They repent, swearing an oath to follow God's laws. 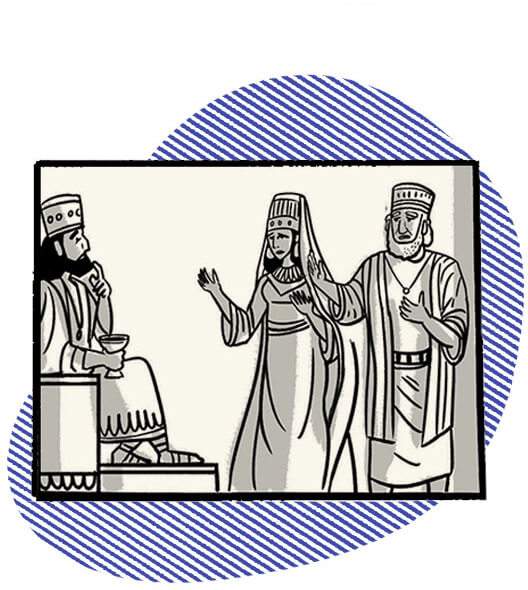 Esther
Though God's name is never mentioned, the Book of Esther is filled with examples of God at work behind the scenes for the benefit of His beloved children.

Tim Mackie Do you want to learn to lead like Ezra and Nehemiah? Keep reading to discover the ancient and important wisdom these books reveal.... Keep Reading
Downloads
Related Downloads
Old Testament Overview Ezra-Nehemiah Overview Poster
Books
Recommended Reading
Academic
Word Biblical Commentary Vol. 16, Ezra, Nehemiah
H. G. M. Williamson
As an Amazon Associate, if you use the link above, we receive a small percentage from qualifying purchases.
How can I help you?
Hi I’m Support Bot! You can ask me questions like:
Where should I start?
How can I track my video progress?
Do you offer subtitles for your videos?
Support Bot Said,
For advanced bible reading tools:
Login  or  Join