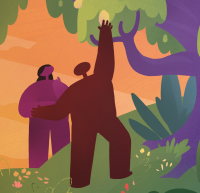 In the final video in our Acts series, we trace Paul’s final journey to Jerusalem and then into a Roman prison. But paradoxically, Paul’s suffering leads him into the heart of the Roman empire where he gets to announce God’s Kingdom over the nations.

The books of Luke and Acts are actually two accompanying works by the same author. Together, they form one cohesive narrative about the life and ministry of Jesus and the birth of the early Church. Check out our Luke-Acts series.

Explore Luke-Acts Series
To download videos:
Login  or  Join
How can I help you?
Hi I’m Support Bot! You can ask me questions like:
Where should I start?
How can I track my video progress?
Do you offer subtitles for your videos?
Support Bot Said,
For advanced bible reading tools:
Login  or  Join