How storyboards mirror the Bible's design

When the script for a BibleProject video is finished, I imagine the writers enjoy a satisfying sense of accomplishment. After days of reading, research, and difficult conversation, they’ve finally wrestled an unruly thesis into submission and pinned it down to a two-page script that is clear, succinct, and informative. A job well done!

But for us artists, the job is only beginning. We’re staring down a blank canvas and contemplating the daunting prospect of creating five minutes of animation from scratch. How do we even begin bringing this script to life? The starting point is the storyboard.

A storyboard is a sequence of illustrations used to previsualize any sort of motion picture. (The connection with animation goes way back: storyboarding was first developed by a certain world-famous animation studio in the 1930s.) Storyboard art doesn’t have to be polished. In fact, at this early stage, scribbling out many quick iterations on a sketchpad or dry-erase board is more helpful than laboring over a single, perfect image. The rule of thumbnails: If it works on the back of my crumpled take-out menu, it’ll work on YouTube. 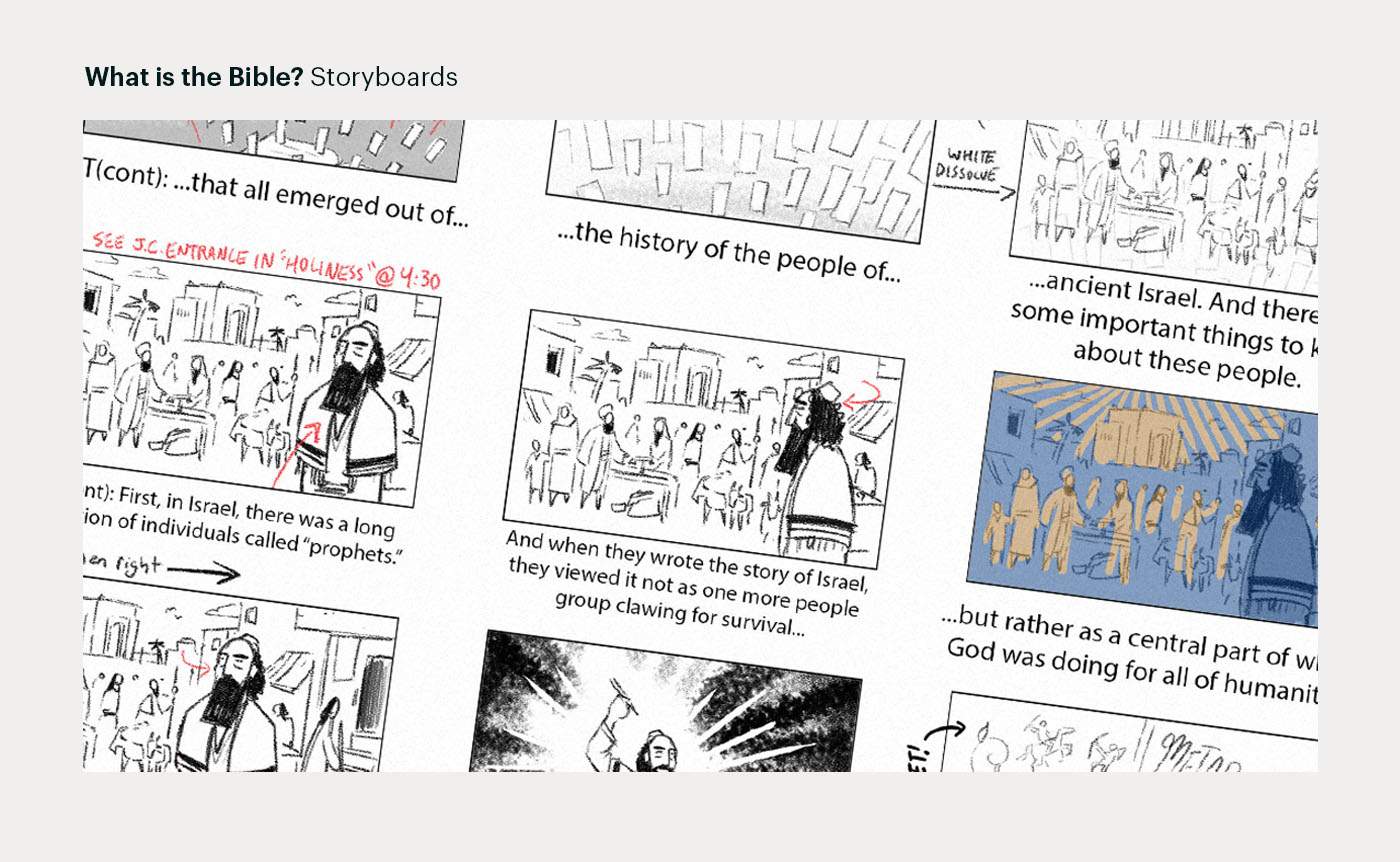 This is the phase of production where we make the biggest decisions. Will a given sequence feature epic wide shots or intimate character moments? Gritty realism or symbolic abstraction? Drama, pathos, or humor? With impulsive imaginations and unlimited creative license, our artists sometimes find that first drafts of storyboards are overstuffed with too many exciting ideas. Drastic swings in tone and sudden, unmotivated shifts in visuals or subject matter result in a storyboard that’s dazzling but ultimately incoherent. One of our main storyboarders, Rose Mayer, insists that storyboard artists must be ruthless about clarity. Even a gorgeous sequence gets trashed if it doesn’t directly enhance the video’s message.

So where do we find this coveted “clarity?” After storyboarding nineteen episodes of our series How to Read the Bible, I’ve learned that a video’s organizing principles are usually already present in the script, and that’s because they’re present in the Bible.

If you’ve followed BibleProject for any amount of time, you’ve probably noticed our fixation on biblical design patterns. (Trust me, if you run into Tim Mackie by the coffeemaker, he will mention this at least once before you’ve chosen a mug.) These deliberate patterns appear in the Bible’s narratives as repeated plot elements, characters, or settings. They also pop up in biblical poetry in the recurrence of specific images, symbols, and metaphors. 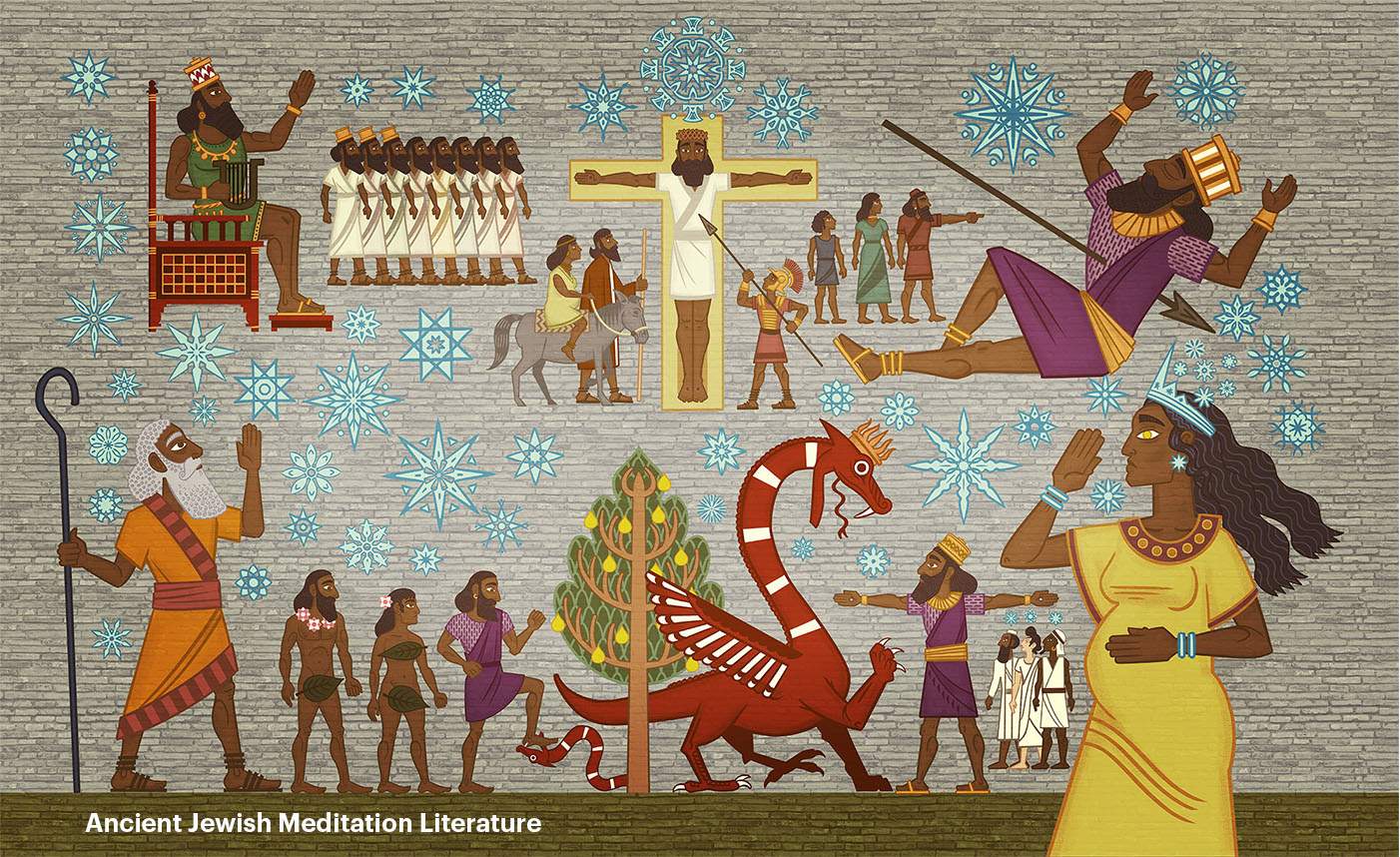 What does a pattern look like in a storyboard? The simplest example would be a “match cut,” where one shot is immediately followed by a visually similar one. Look at this cut from How to Read the Bible: The Prophets, contrasting how the writings of the prophets were ignored in their own day but cherished by later generations. 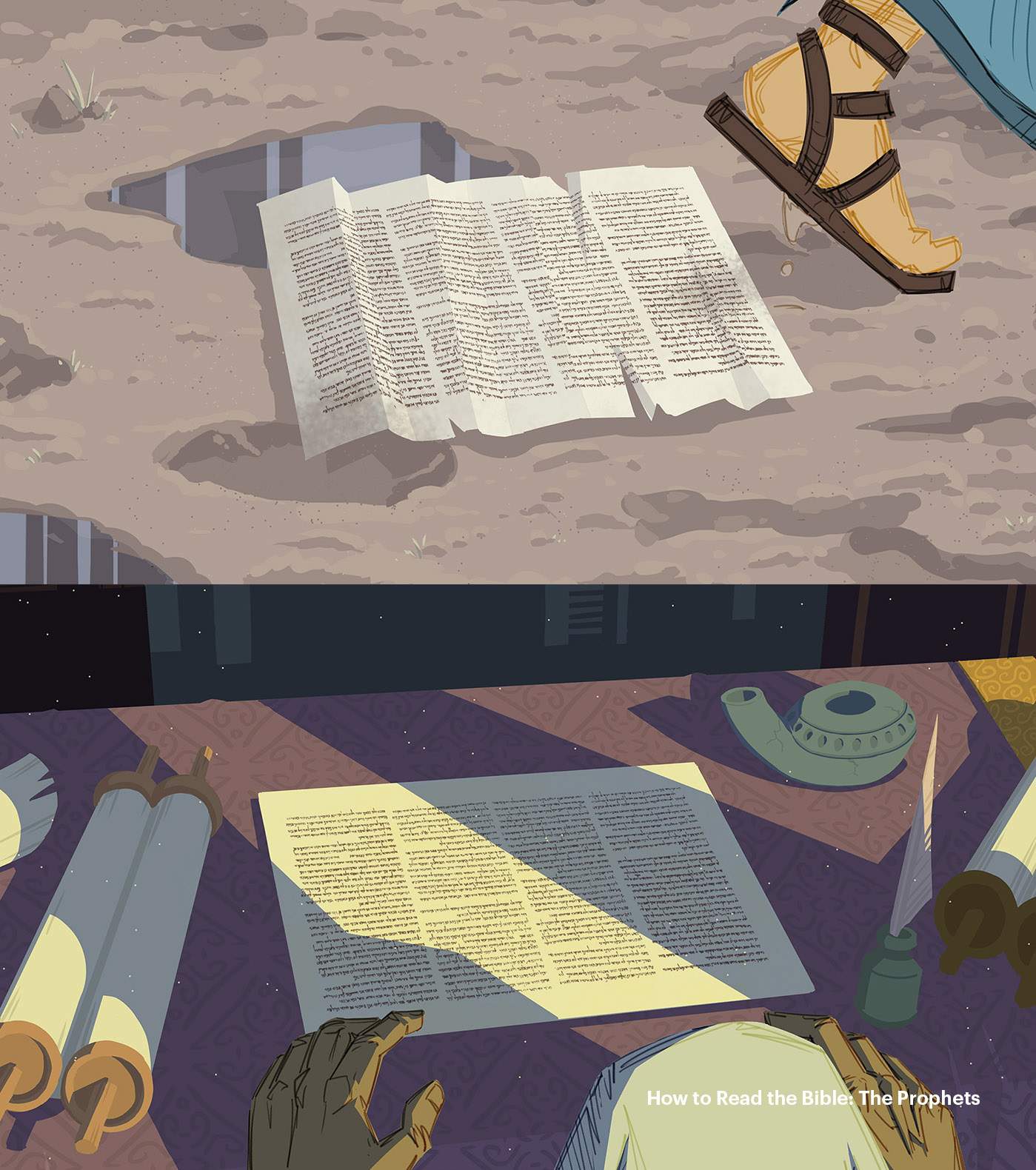 Because the papyrus is exactly the same shape and size from one shot to the next and occupies the same position on-screen, our minds are instantly able to surmise the connection, even if it means leaping across centuries. One of cinema’s most famous match cuts, a tossed femur cutting to an orbiting spaceship in 2001: A Space Odyssey, asks for an even greater time jump! Notice how that cut also asks the viewer to draw a metaphorical connection between primitive and advanced technology.

Look at this sequence of images from Metaphor in Biblical Poetry. In keeping with the fluid style of the video, these are actually painterly dissolves rather than abrupt cuts, but the effect is the same. 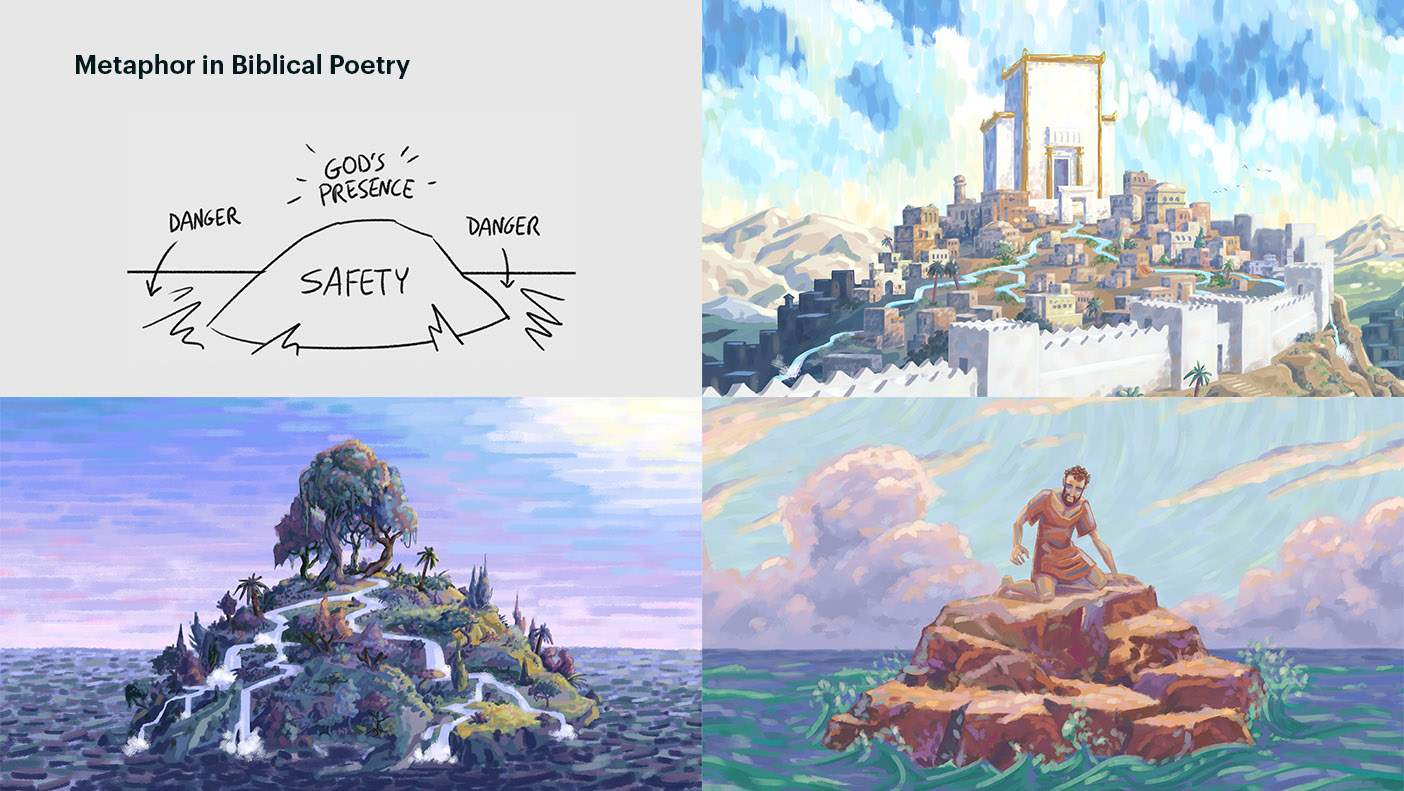 A lush island, a walled city, and a man perched on a wave-lashed rock might not seem related in a literal way. But because the compositions are the same (central, triangular subject, with danger at the bottom and safety at the top), we automatically understand the implied symbolic relationship.

Haven’t I Seen This Before?

Check out these two shots from How to Read the Bible: The Parables of Jesus. 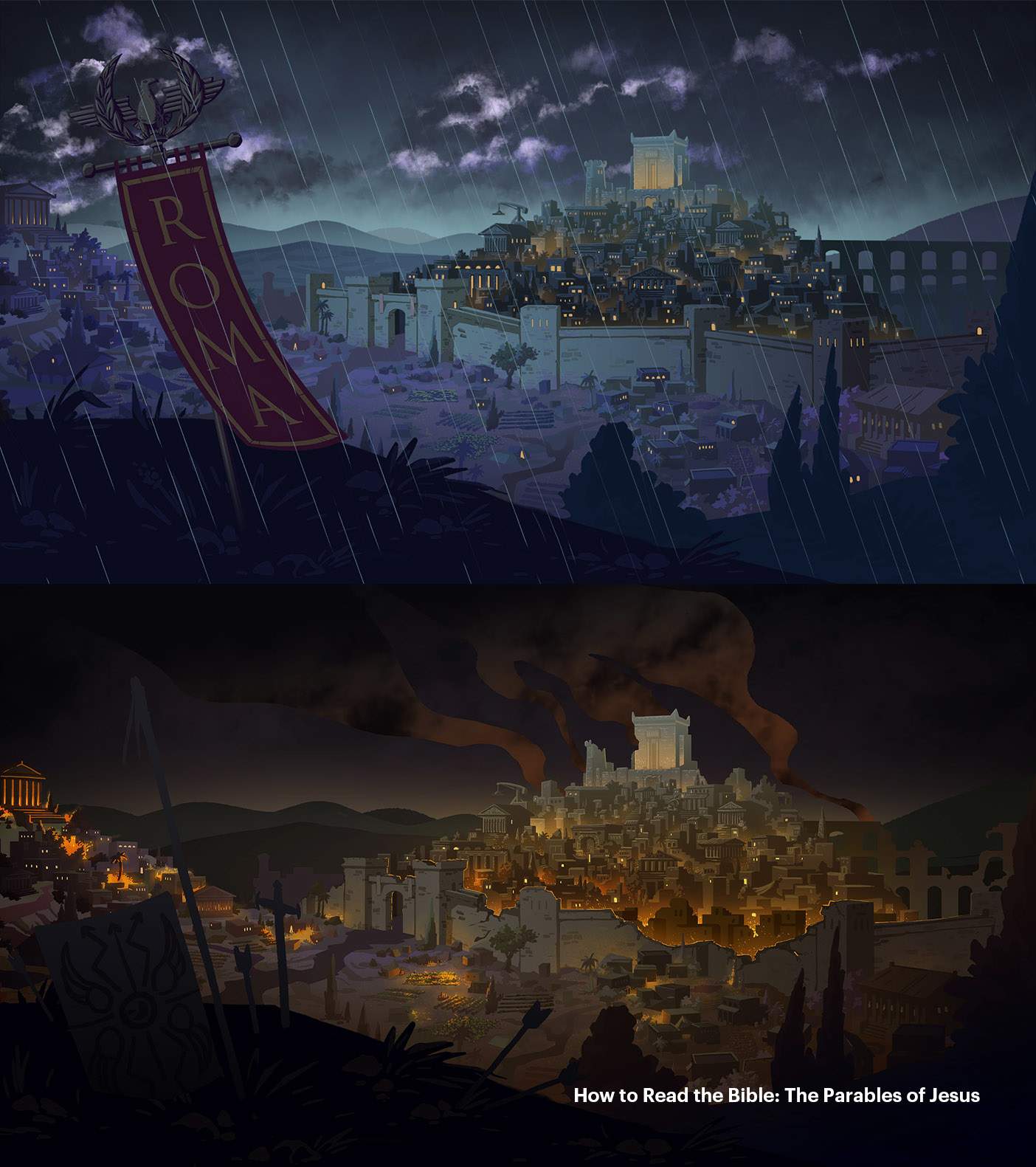 These images of Jerusalem are not shown back-to-back; there’s actually a long sequence in between where Jesus confronts the temple leadership and tells a foreboding parable. But these bookending wide shots are so similar, in their subject matter and visual composition, that mentally connecting them is effortless. The memory of the first shot returns when you see the second. You’re left to infer that Jesus’ harsh prediction eventually came true.

Or consider these two shots from How to Read the Bible: Psalms. The first occurs two minutes into the video, the second at the five minute mark. Different era, different place, different character. But the thematic and compositional similarities (the rain, the distant city, the watery reflection) help you form the connection between ancient exile by the rivers of Babylon and the “exile” still experienced today. 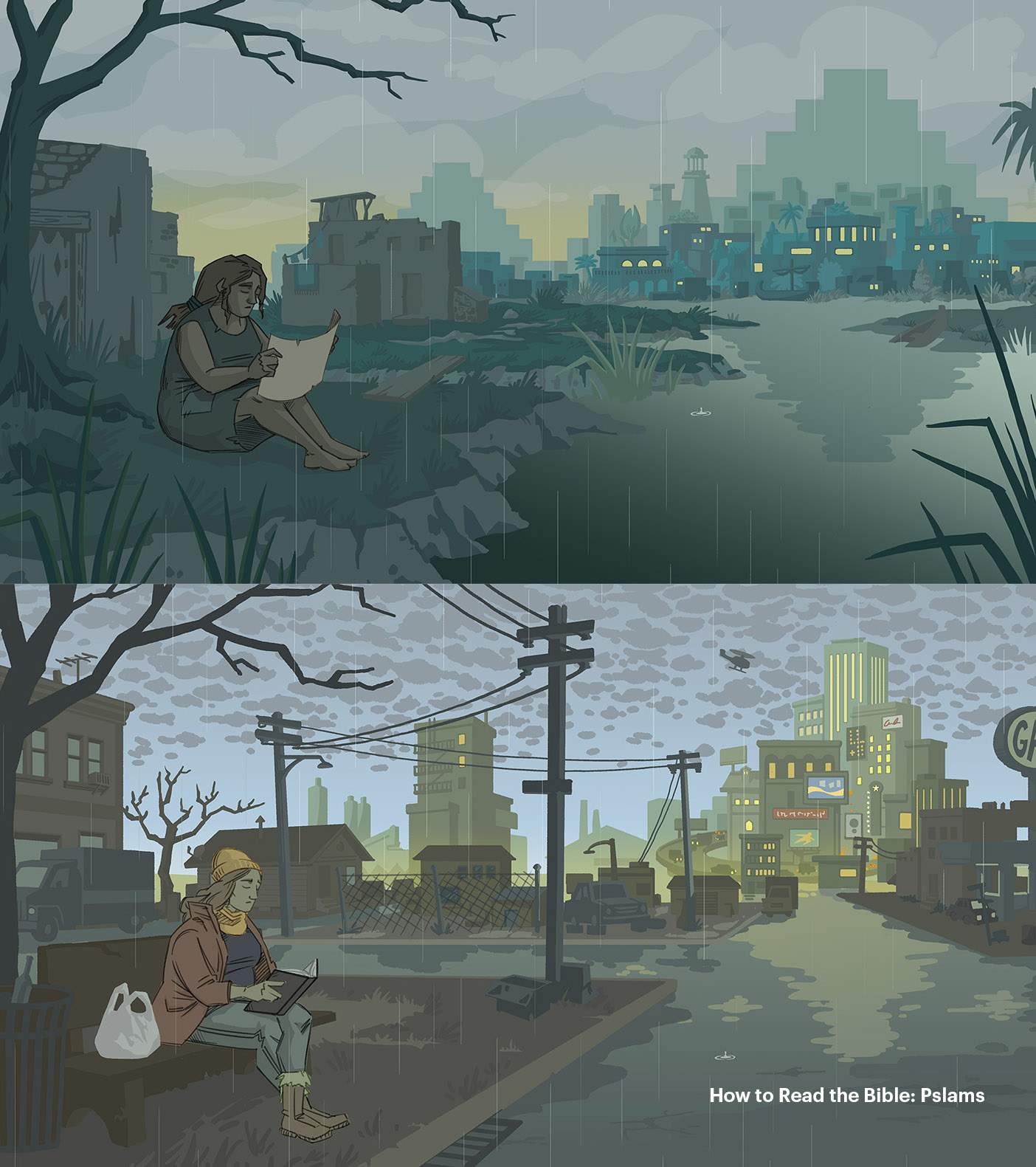 The examples so far are all in sets of two or three and work in isolation as a fun or helpful gimmick. But what if a composition is repeated more than that? In fact, repeated compositions can be used as an organizational principle for an entire video.

Before we even began storyboarding How to Read the Bible: The Books of Solomon, we settled on a recurring image that would tie the whole video together. It would serve as the emblem of the video’s thesis: the peaceful beauty of man and woman ruling in God’s wisdom and love. We had to nail down the compositional template exactly, since Nyssa Oru and I would be splitting illustration duties. The same essential shot, with some variation, appears six times throughout the video. 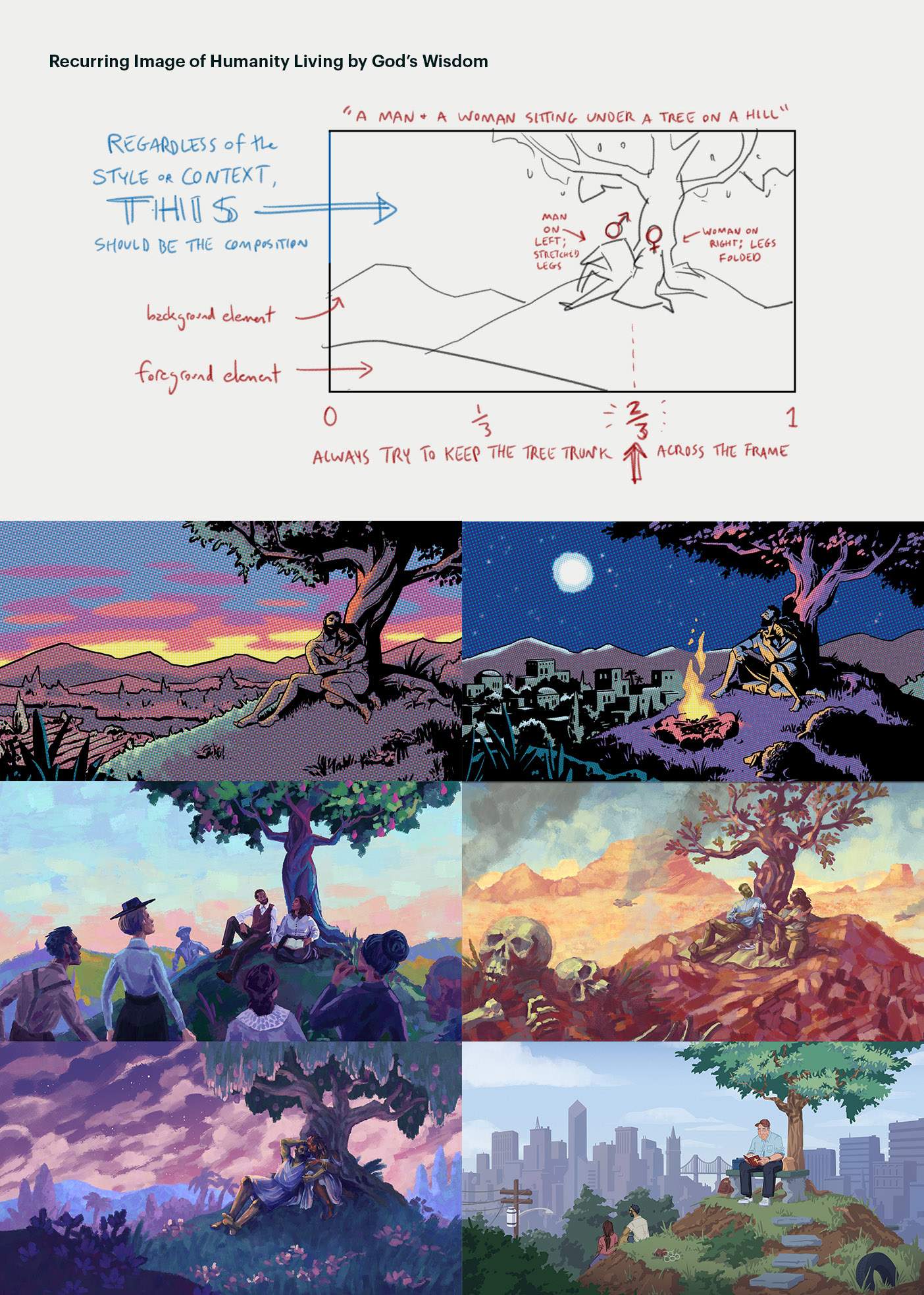 We pushed this technique even further in the series’ second video, How to Read the Bible: Biblical Story. Here, it’s not a single shot but an entire sequence of shots that gets repeated. We blitz through the stories of Adam and Eve, Abraham and Sarah, Jesus, and some archetypal early Christians. In each iteration, the characters appear as tiny figures on the horizon, walk towards the camera, stand at a symbolic fork in the road, and contemplate the choice they face. 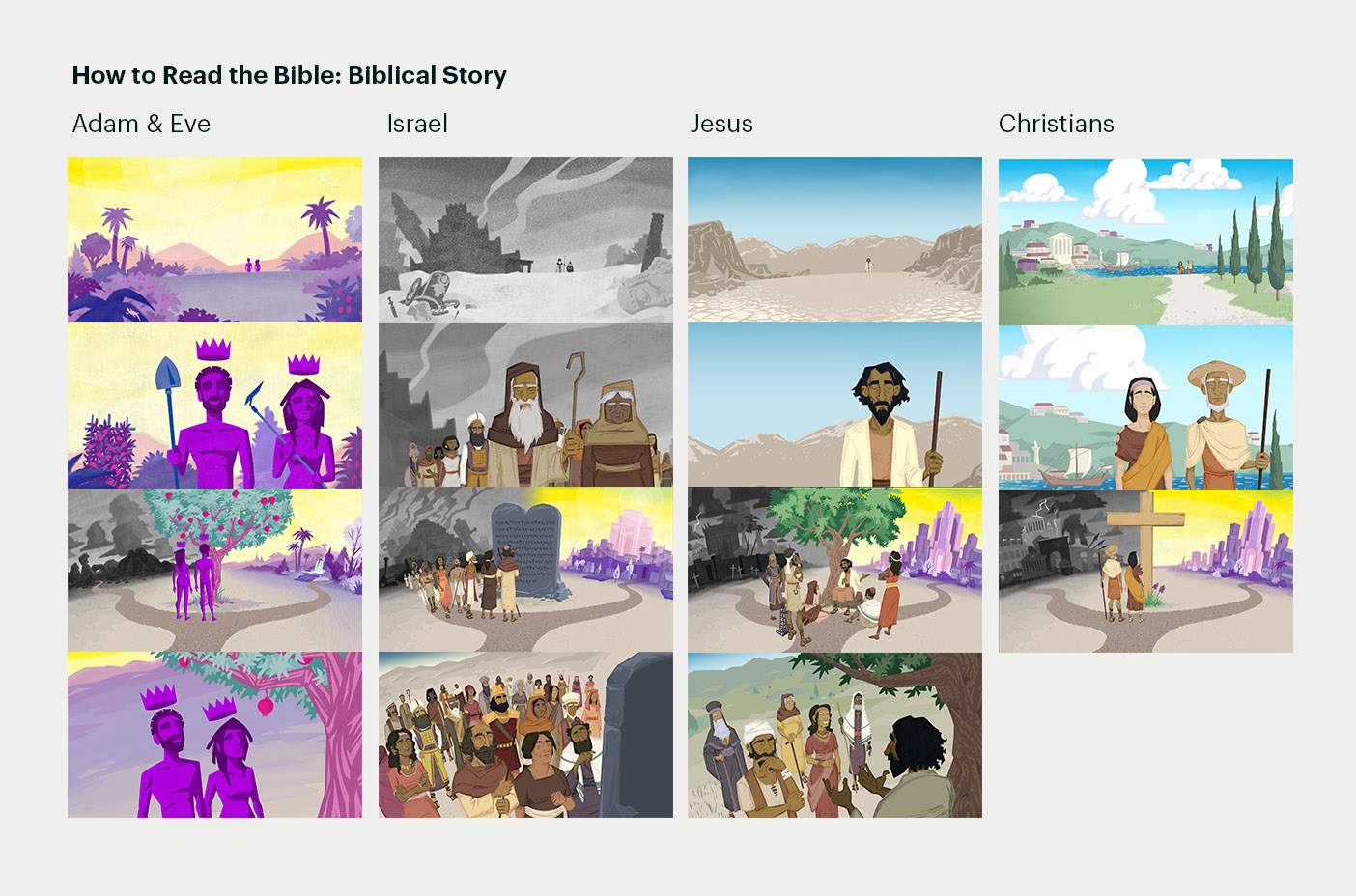 Our hope is that such visual repetition will coax viewers into the reading practice of seeking out the design patterns that the biblical authors have seeded everywhere in their writings. So Abraham and Sarah appear as a second Adam and Eve––a new chance to kickstart a faithful humanity. But wait. That would make Jesus a new Abraham and a new Adam! What about the background scenery—is Rome another Babylon? Is the tree of knowing good and evil a precursor to the laws of the Torah? Is the New Jerusalem on the last page of the Bible actually the garden of Eden from page one?

At an even higher level of abstraction, storyboarders can use portions of the screen as thematic visual parallels. In How to Read the Bible: Apocalyptic Literature, prophets and visionaries are always, always on the left half of the screen. (We chose the left not for any symbolic reason but because people who read from left to right—the majority of our viewers—also tend to look across a screen in this direction.) This means that when John first appears, standing slightly left of center near the shores of Patmos, his position has already “tagged” him as a visionary before the vision even starts.

For another example, notice how the screen is often divided horizontally in New Testament Letters: Historical Context. The top half of the screen frequently represents domination and sneering contempt—Roman aristocrats, prideful Christians, wealthy neighborhoods—while the bottom of the screen is reserved for the poor and humble. This division itself, whether indicated by railroad tracks or a dinner table, is a symbolic barrier to be transgressed, as the message of the Gospel overrides social distinctions. 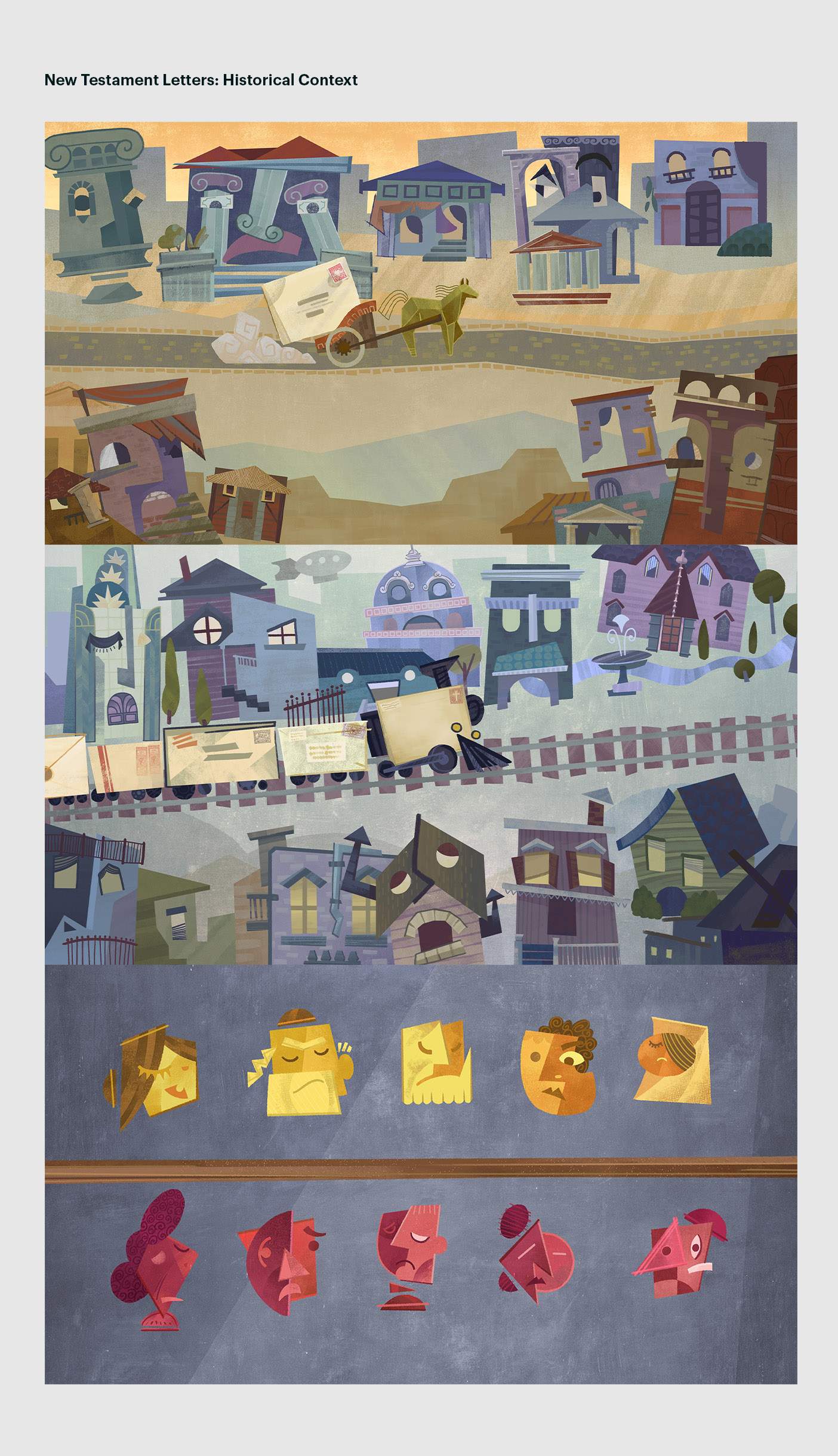 Storyboarders can even use the movement of the camera to produce compositional parallels. Again, look at the How to Read the Bible: Apocalyptic Literature video. Whenever a character experiences a revelation, the camera pulls back. The prophet is drawn out of his own tight, inwardly focused perception of the world, receiving a broader vision of the cosmos, just as our literal view of the scene widens.

Are We Meant to Notice All This?

This raises a question: how explicit should a storyboarder make these parallels? If a sequence is ham-fistedly obvious, the viewer’s intelligence might be insulted. (“Hey! Check out my SYMBOLISM. Do you get it? Do you GET IT?!”) If it’s art-house subtle, you’ll get extra appreciation from a few keen-eyed viewers, but others might miss the meaning entirely. Meanwhile, most viewers might only absorb a visual parallel at the subconscious level, but this isn’t necessarily a bad thing.

Again, we can follow the lead of the Bible’s authors and compilers. The prophets and apostles certainly weren’t above gobsmacking obviousness when it came to design patterns. (“He was in the WILDERNESS for FORTY DAYS. Ahem. Like in the Exodus? Do you GET IT?!”) But they could also deploy incredible subtlety when they wanted to, confident that these deeper connections would surface on a second, third, or twentieth reading.

For most of my life, the design patterns of the Bible lingered just beneath my perception, like an inaudible rhythm that was felt rather than heard. I remember mixing up the stories of Joseph and Daniel—those two devout dream-interpreters promoted in the courts of foreign kings—but still not recognizing them as literary parallels. Now, as I’m learning to identify these patterns, examples spring readily to mind. This is because I have, in a sense, already registered them at an intuitive level.

Even if I fancy myself a perceptive, “artsy” person, I know there are plenty of clever patterns in movies, television, and comic books that breeze right past me. But for my favorite works of art, the ones I rewatch or reread devotedly, even the faintest patterns become distinct.

Back to the Drawing Board

All that said, my personal approach to storyboarding is still to err on the side of the obvious. We are trying to make educational videos after all, so Rose’s maxim of clarity still abides. Ever dropped a bunch of seemingly blatant clues about what you want for your birthday only to be disappointed? My “obvious” hints probably aren’t as obvious to others as they seem to me!

The literary style of the Bible is centuries removed from the modern medium of the internet explainer video. But the prophets and poets who wrote the Bible established a practice of careful repetition and recapitulation that works just as well today.

Once a mild-mannered assistant editor at Dark Horse Comics, Everett Patterson was bitten by a radioactive Bible and became a junior Art Director for BibleProject in Portland, Oregon. Before working on the How to Read the Bible series, he illustrated the majority of the Read Scripture/Overview series.

Previous
God is Like a Nursing Mother
Back to All Blog Posts
Next
The Sins of Our Fathers
For advanced bible reading tools:
Login  or  Join
Which language would you like?